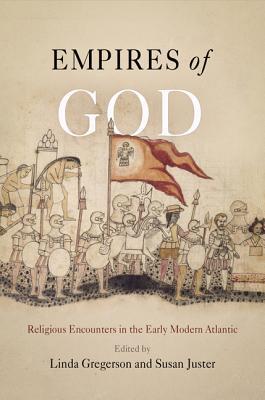 Religious passions and conflicts drove much of the expansionist energy of post-Reformation Europe, providing both a rationale and a practical mode of organizing the dispersal and resettlement of hundreds of thousands of people from the Old World to the New World.

Exhortations to conquer new peoples were the lingua franca of Western imperialism, and men like the mystically inclined Christopher Columbus were genuinely inspired to risk their lives and their fortunes to bring the gospel to the Americas. And in the thousands of religious refugees seeking asylum from the vicious wars of religion that tore the continent apart in the sixteenth and seventeenth centuries, these visionary explorers found a ready pool of migrants--English Puritans and Quakers, French Huguenots, German Moravians, Scots-Irish Presbyterians--equally willing to risk life and limb for a chance to worship God in their own way.Focusing on the formative period of European exploration, settlement, and conquest in the Americas, from roughly 1500 to 1760, Empires of God brings together historians and literary scholars of the English, French, and Spanish Americas around a common set of questions: How did religious communities and beliefs create empires, and how did imperial structures transform New World religions?

How did Europeans and Native Americans make sense of each others spiritual systems, and what acts of linguistic and cultural transition did this entail? What was the role of violence in New World religious encounters? Together, the essays collected here demonstrate the power of religious ideas and narratives to create kingdoms both imagined and real.

Comments
Comments for "Empires of God: Religious Encounters in the Early Modern Atlantic":