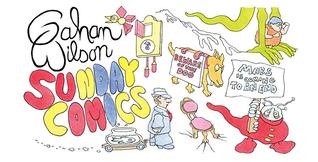 Gahan Wilson Sunday Comics is Wilson’s assault from within: His little-known syndicated strip that appeared in America’s newspapers between 1974 an 1976. Readers must have been startled to find Wilson’s freaks, geeks, and weirdos nestled among family, funny-animal, and soap opera offerings. (The term “zombie strip” — a strip that has long outlived its original creator — takes on a whole new meaning in Wilson’s hands.) While each strip, at first glance, appears to be a standard, color Sunday strip (albeit without panel borders), each Sunday Comic is a collection of one-panel gag cartoons, delineated in Wilson’s brilliantly controlled wiggly-but-sophisticated pen line.

The last gag cartoon on each Sunday is part of a recurring series, either “Future Funnies” or “The Creep.” Some Sundays are a freewheeling mélange of board meetings, monsters, and cavemen (with cameos by Wilson’s Kid character from Nuts, his gimlet-eyed view of childhood, collected last year by Fantagraphics), while others riff on a topic or subject (clocks, plants, wallpaper, etc.).

As is his wont, Wilson mines the blackest of black comedy in the banal horror of human nature. Gahan Wilson’s Sunday Comics collects, for the first time, each and every one of these strips, luxuriating across a 12” x 6” landscape format, with Fantagraphics’ trademark high production values, innovative design, and succinct historical commentary.