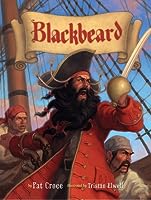 Climb aboard the Queen Annes Revenge and sail with the most notorious pirate of all time, Blackbeard! No one has struck terror into the hearts of men more than Edward Teach, whose big black beard gave him his name. From merchant ships to naval vessels, no target was safe from Blackbeards bloodthirsty desire to take prizes along the Atlantic coast and Caribbean.

And now, the legend of Blackbeard will rise again as a main character in the upcoming film, Pirates of the Caribbean 4: On Stranger Tides. The Disney series has already grossed over two billion dollars, and this new installment--featuring the greatest pirate of all time as Captain Jack Sparrows nemesis--is sure to be a major blockbuster when it releases in Summer 2011.But first, bone up on the true history of this real American villain in our beautifully illustrated edition of Blackbeard, penned by world renowned pirate expert, Pat Croce.