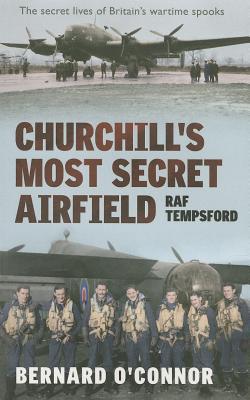 Designed by illusionist Jasper Maskelyne, RAF Tempsford was constructed to give overflying enemy aircraft the impression it was disused. Nothing could be further from the truth - just after dusk on moonlit nights either side of the full moon, planes from the 138 and 161 Squadrons would take off on top secret missions to the heart of the war-torn Continent. They had to fly low and without lights in order to identify drop zones and deliver the supplies and secret agents that would help the resistance forces liberate Europe.

But despite the attention of Churchill and George VI, the airfields secrets have long remained an untold chapter in the story of the war. Based on over a decades extensive research, Churchills Most Secret Airfield: RAF Tempsford is filled with intrigue, suspense, heartbreak, and humour. It is a fascinating account of a deadly serious business. Bernard OConnor has been a teacher for almost forty years and is the author of Agent Rose and Churchills Angels, also for Amberley.

He lives in Bedfordshire. RAF Tempsford is in walking distance of his home.